The U.S. could add around 4 million barrels per day (mb/d) of additional supply in the coming years, and most of it will be shipped abroad, turning the U.S. into a major oil exporter.

Most of the new supply will come in the form of light sweet and ultra-light oil. But because refineries along the Gulf Coast are largely equipped to handle medium and heavy crude, the new production probably won’t find a home inside the U.S.

WoodMac estimates that initially a lot of the exported crude will head to Europe, where refining values are high. However, U.S. oil will have to compete with crude coming from West Africa. Once the European market is saturated, U.S. shale oil will be rerouted to Asia. Hefty transportation costs to Asia will force U.S. shipments to be offered at a steep discount if they are to be competitive. Nevertheless, it seems likely that exports will steadily ratchet up.

However, the flood of new oil coming from the U.S. shale fields will require an overhaul of pipeline and export terminals along the Gulf Coast. The Permian Basin is expected to lead the way, adding around 2 mb/d of additional supply by 2023. Already, the basin is facing pipeline bottlenecks, forcing producers to wait to complete drilled wells. 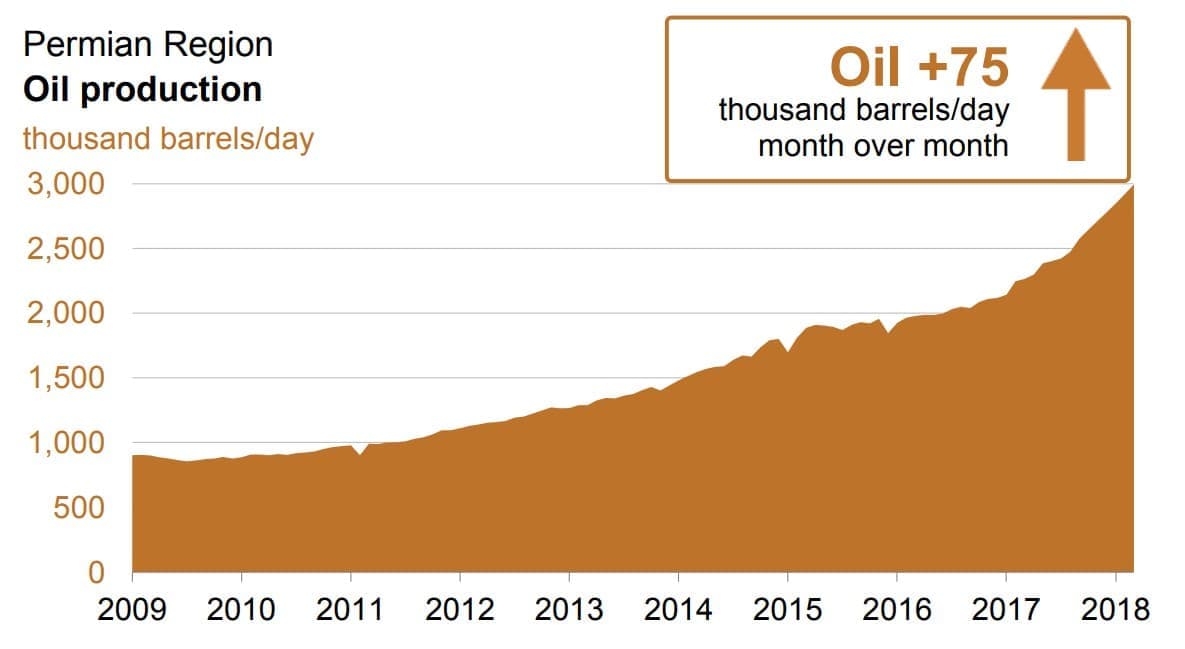 But the midstream sector is scrambling to resolve the issues.

The Capline pipeline that runs from Louisiana to Illinois, and used to shuttle large volumes of imported oil north to Midwest refineries, has seen volumes plummet. Its owner is now looking to reverse the flow, sending Bakken crude to the Gulf Coast, either for refining or export.

As the FT notes, a flurry of other projects is also in the works. New pipelines – the BridgeTex, Permian Express and Cactus pipelines – have begun ferrying Permian oil to the coast of Texas in the past two years, erasing what had once been a steep discount for Midland crude relative to WTI due to the infrastructure bottlenecks.

But, with output in the Permian continuing to rise at a rapid clip, more capacity is needed. For instance, the Cactus pipeline network is set to add two more lines, expanding capacity from 390,000 bpd to 575,000 bpd. The lines run from the Permian to Corpus Christi, and the expansion is expected to come online by the end of next year.

Overall, an estimated 2.1 mb/d of midstream capacity is under construction, according to RBN Energy, and cited by the FT.

“Everybody wants to get to water,” Corey Prologo, director of North American oil trading at Trafigura, told the CERAWeek Conference on Tuesday, the FT reported. “All the current pipelines are getting filled out, which they previously weren’t.”

New export capacity along the coast will also be required. The recent upgrading of the Louisiana Offshore Oil Port (LOOP) has inaugurated a new era of U.S. exports, allowing very large crude carriers (VLCCs) to load up on U.S. shale to be shipped abroad. Related: Is The Sky The Limit For U.S. Shale?

Additional expansions to handle the surging shale supply are also in the offing. WoodMac says the port of Corpus Christi is the obvious next candidate for increases in shipments. The consultancy sees crude exports from Corpus Christi rising to 1 mb/d by 2020 and 2 mb/d by 2023.

It all amounts to a radical reworking of the U.S.’ pipeline and export facilities, channeling oil that had once gone from the coast to the interior back in the other direction.

Ready to Find Your New Career?